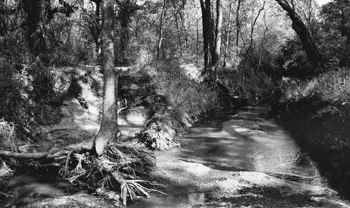 Southlake sits in a geographic region thick with blackjack and post oak trees and artesian springs; in the 19th century, cartographers named the area the Eastern Cross Timbers. This 2004 photo was taken at the Bob Jones Nature Center. (Courtesy of Bob Koontz)

Prior to 1836 – Native Americans live and hunt in the thick forests of blackjack and post oak called the Eastern Cross Timbers, which extend in a dagger shape from southeastern Kansas through Oklahoma into central Texas.  Early Indian tribes in the area are thought to include Tonkawas and the Hasinai Caddos. By the late 1700s the Comanches, Kiowas and Wichitas had moved into the region.

1540-1542 – In search of the fabled Seven Cities of Cibola, Francisco Vasquez de Coronado leads an expedition across northern Texas.

1830 – Mexico forbids further immigration into Texas by settlers from the United States.

1836 – Texians win their independence from Mexico and form the Republic of Texas. 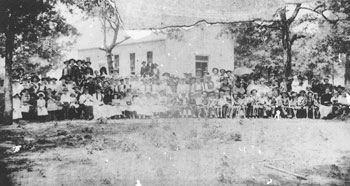 Members of Lonesome Dove Baptist Church gathered next to their church for this photograph circa 1860. The church was formed in early 1846, the same week the Republic of Texas flag was lowered in Austin and replaced with the flag of the state of Texas.  See "Missouri Colonists" to read about the founders of the church, who came to Texas with "their families, dogs, guns and religion." (Courtesy of the Joyce family)

Gen. Edward H. Tarrant orders the construction and garrisoning of a fort to protect the extreme northwest corner of the Texas frontier. Bird’s Fort becomes the site of Birdville, now part of northeast Fort Worth.

1843 – Republic of Texas President Sam Houston camps at Grapevine Springs (near Coppell) during treaty negotiations with various Indian groups. The treaty, intended to bring “peace, friendship and commerce” to the area, was later signed at Bird's Fort. A demarcation boundary established by the treaty keeps many Indians to the west of now-Southlake. Working as an interpreter was Jesse Chisholm, for whom the Chisholm Trail is named.  (Note: The Chisholm Trail began at the Red River and went north. It did not extend into Texas.)

1846 – Lonesome Dove Baptist Church is established in February on the same weekend the Republic of Texas flag is lowered at the Capitol in Austin and the state of Texas flag is raised during the formal transfer of government.

1850 – Tarrant County is organized, and an election is held.

1859 – Mount Gilead Baptist Church, a sister church of Lonesome Dove, is burned by a raiding band of Indians. Mount Gilead is in present-day Keller. 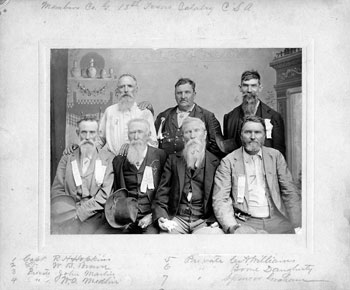 Soldiers from our area attending their 40th Confederate Army reunion included Spencer Graham (front row, right), W.O. Medlin (back row, middle) and five others from Co. G, 18th Texas Cavalry.  The reunion was held in Dallas in 1902. Read more about every Confederate and Union soldier and veteran who lived in the now-Southlake-Grapevine-Colleyville area by accessing Michael Patterson's website through our section "Civil War." (Courtesy of the Denton Public Library)

1866 – The abundance of longhorn cattle in southern Texas and the return of Confederate soldiers to a poor Reconstruction-era economy mark the beginning of the era of Texas trail drives to northern markets. Trails running through North Texas include the Eastern, McCoy and Shawnee; the closest trail to now-Southlake follows the approximate route of today's I35W.

1888 – Robert E. Wilson, the founder of the Jellico community, opens a general store near the intersection of present-day Davis Boulevard and Southlake Boulevard.

1889 – The Dallas, Pacific & Southeastern Railway Co. lays out a roadbed for a railroad from Letot, Texas, to Albuquerque, but stops at the Jack County line. The roadbed passes northwest of Grapevine generally along what would later become Texas 114. 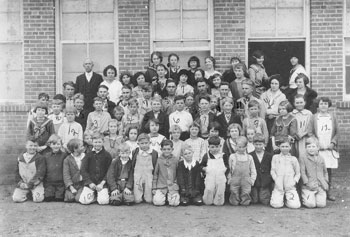 Carroll School opened in 1919, bringing together students in grades 1-9 from area one-room schools. The school is still standing. Read more in "1919 Carroll School" under Buildings and Markers. (Courtesy of the Shivers family)

1901 – “Black gold" is discovered at the Spindletop oil field near Beaumont.

1917 – Local school districts of Dove, White’s Chapel, Union (formerly Easter) and Sams combine to become Common School District No. 99. By 1919, No. 99 is named for B. Carroll, county superintendent of instruction.

1919 – The men in district No. 99, then a poor, rural area west of Grapevine, vote to increase their taxes to build a school.  Three-room Carroll School opens in the fall next to a wagon road renamed Carroll. It accepts only white students.

Bob Jones builds a “colored” school near the Denton and Tarrant county line for his grandchildren. 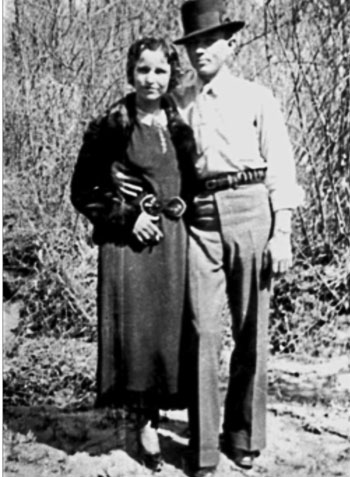 Bonnie had relatives in our area. When he was a boy, Clyde and his family lived for a time near 114 and Kimball.

1929 – Construction of Texas 114 begins along a roadbed purchased from a bankrupt railroad. Construction is completed in 1932.

1934 – Bonnie and Clyde or a member of their gang kill two state troopers near Dove Road and Texas 114.

1948 – Construction of Lake Grapevine begins. It takes four years to complete the project and costs about $11.8 million.

1956 – Southlake is incorporated on Sept. 22 by a vote of 30-24. The town measures 1.62 square miles and has an estimated population of 200. The first mayor is A. Gail Eubanks; his daughter Suzanne comes up with the name Southlake (see "Did You Know" on the homepage).  Five aldermen and a town marshal also serve. Businesses include the Mesco Metal Buildings Co., Casey’s Grocery, Board’s Store, Bailey’s Grocery, Couch’s Grocery, a few egg and hog farms, and a cotton gin. The incorporation vote is held at the 1919 Carroll School, which serves for a while as City Hall.

1959 – Carroll upgraded to an Independent School District.  Grades are 1-8. For high school, students go to Grapevine.  Jack D. Johnson, who had been school principal, was named superintendent, a job he holds for 30 years.

The Southlake Planning Board is formed. City Hall opens inside Casey’s Grocery on Texas 114 at Carroll Avenue. Discussions begin into the city providing residents with water.  Citizens currently rely on well water and septic tanks.

1965 – Town of Southlake becomes the City of Southlake. The first city bond election, to approve a plan to provide city water, is held. 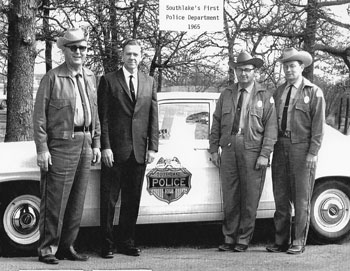 1966 – The Southlake Fire Department is established as an all-volunteer force. The first fire engine, a 1,000-gallon truck, is purchased from Carswell Air Force Base.

The Southlake Police Department is established. The town marshal is renamed the chief of police. (Read about the early days of the police and fire departments by clicking the People tab.)

The city's first library is established, inside the 1919 Carroll School.

The City Council approves a 1.5-cent ad valorem tax on each $100 of assessed value of taxable property.

The first patrol car is purchased.

1968 –  The first comprehensive land use plan is developed in conjunction with Fort Worth-based Carter & Burgess, Engineers.

Groundbreaking is held for the Dallas-Fort Worth Regional Airport. 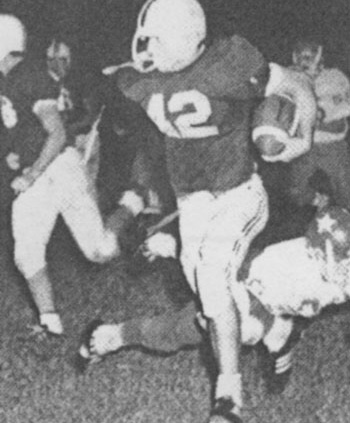 Carroll Dragon football tradition began in 1965 with a team fielded by ninth-graders. These players were on the 1972 team.

1975 – Southlake Parks and Recreation Board established.

1986 – Southlake builds a 1.5-million-gallon water tower at Dove Road and North White’s Chapel Boulevard that becomes a prototype for about 80 percent of the large water towers built in the U.S.

City annexes unincorporated areas at the rate of 10 percent per year. 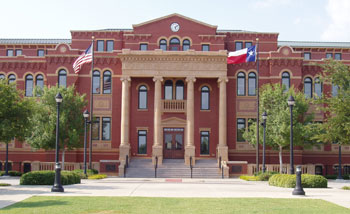 The design of Town Hall was inspired by Texas' historic county courthouses.  (Courtesy of City of Southlake)

1996 – Monument to State Troopers E.B. Wheeler and H.D. Murphy, murdered by Bonnie and Clyde of a member of their gang, is dedicated.

Southlake Historical Society disassembles the log cabin near today’s Central Market and stores it, planning to reconstruct it when possible. The structure is thought to date from the mid-1860s and was occupied into the 1940s.

2004 – A grand-opening celebration is held for Texas 114; the 12-lane, grade-separated freeway took three years to construct.

Southlake's log house, made of logs cut and hewn about the time Abraham Lincoln was president, is built in Bicentennial Park, just off of White’s Chapel Boulevard. The site is the former Blossom Prairie, where in the mid-1800s wagon trains filled with settlers, gold-seekers and others would spend the night on their journey west.

2010 – The Department of Public Safety headquarters building on Carroll Avenue is dedicated.

2011 – Phase 1 of improvements at Bicentennial Park is completed.

Walnut Grove Elementary, named after the school Bob Jones built about 1920 for his grandchildren because they could not attend whites-only schools, opens on North White Chapel Boulevard.

The Marq Southlake, a community, recreation and senior center, opens its first phase.

Ground is broken on Bicentennial Park Phase 3 improvements, which include a Southlake Tennis Center and the Champions Club at The Marq Southlake. Champions Club will be a recreation and fitness center.

The first Celebrate Southlake event is held to celebrate the history and culture of Southlake. The event follows the rededication of Frank Cornish IV Park. .