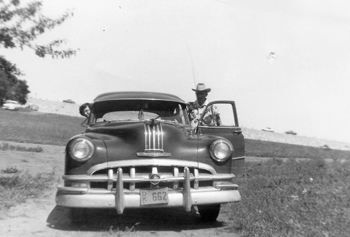 When Lake Grapevine was being built, Wanda and Bill Stowe sometimes drove over in their first automobile to take a look. Notice the cars driving along the dam road in the background.

In 1945, the federal government authorized a lake that would tame Denton Creek (which overflowed each spring), provide recreation and supply water to cities. It began buying up and then condemning land needed for the lake – some 12,000 acres.

“Dairy farms and truck or produce farms were where the lake is now,” remembers resident Mabel Cate in an oral history.  Some people were angry and suspicious of the process. “It was a sad time because they had no choice,” she remembered.

“We had relatives and friends that had lived [on Denton Creek land] all their life.  And when those houses started coming out – they moved a lot of them to Grapevine – it wasn’t funny.  But they told us it was progress, and ‘you’ve got to go with progress.’ So we did.”

As the lake was being built, locals would drive into the bottomlands to visit the site.  “We’d go down there every Sunday. That was a big deal for us, watching them take dirt out for the dam,” remembered Darrell Shockey, who grew up between Roanoke and Southlake.  Wanda Stowe and her husband, Bill, drove down to the site in their first automobile and had their picture taken.

Descendants of Bob and Meady Jones were among those displaced by construction of the lake.  They all moved, except for Eugie Jones Thomas, their daughter.  “I fought them [Army Corps of Engineers] … it went to Washington,” she recalled.  “Then one day the mailman brought me a letter. ‘You can keep all of your property,’ it said. My home was more to me than money.”

The Army Corps of Engineers began work on the lake in 1947 and completed it in 1952. Locals were told it would take 10 years for the lake to fill. But as locals predicted, it filled up during the first big rain. A dragline and other equipment still rests under the lake.

For more information, visit the Lake Grapevine entry in the Handbook of Texas Online.