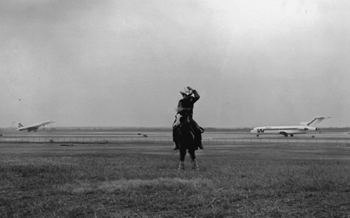 A DFW Airport marketing photograph, circa 1974, illustrates the changeover from ranch and farm to airport.

Work toward a regional airport began in 1940 at a meeting in Wichita Falls of the Texas Aeronautics Advisory Committee and the Civil Aeronautics Board. But who should get the airport, Dallas or Fort Worth?  After years of wrangling, an agreement was reached in 1968 that placed the airport between the two cities.  An engineering firm recommended it be built along the Tarrant-Dallas county line near Grapevine. In 1974, the Dallas-Fort Worth Regional (later International) Airport opened for business.  For citizens of Southlake, economic benefits would follow, but so would problems associated with noise, runway proximity, air pollution and traffic.

Seventeen thousand acres were purchased to build the airport at a cost of $68 million.  In an ironic twist, some people whose houses had been moved in the 1940s from the Denton Creek bottomlands to the Grapevine Prairie – in advance of Grapevine Lake – were displaced again in the 1960s by the construction of the airport.   The airport would ultimately cover more than 29.8 square miles.

When excavation for the airport began, workers uncovered the bones of a 70-million-year-old plesiosaur.   With a grant from Braniff Airlines, SMU graduate students reassembled the skeleton of the 25-foot-long creature.

To learn more about the Dallas-Fort Worth International Airport, we recommend you visit the Frontiers of Flight Museum at Love Field in Dallas.  Bruce Bleakley, museum director, gives an outstanding presentation on the quirky beginning of D/FW Airport to community groups.  Frontiers of Flight partners with the Smithsonian Institution.

Here is a newspaper article written about a talk Mr. Bleakley gave as part of the Southlake Historical Society's Distinguished Speaker series.

It's no accident that D/FW Airport sits right in the middle of the Metroplex.

Looking at a satellite map of the area, it looks like the logical place to build the world's third largest airport.

The pristine farm land was flat and the surrounding land mostly undeveloped in the 1960s.

But aviation historian Bruce Bleakley said the location had more to do with politics and getting Dallas and Fort Worth to compromise than what was convenient.

The cities had their own airports and, in the early decades of flight, saw no reason to give that up.

"There's plenty of stubbornness to go around in the 75-year history," Bleakley told residents and aviation enthusiasts at a recent Southlake Town Hall meeting [sponsored by the Southlake Historical Society].

Area leaders changed their tune in the 1940s and 1950s when advancements in aeronautics created bigger planes that needed longer runways, something neither Dallas' Love Field or Fort Worth's Meacham Field could accommodate.

Bleakley, director of the Frontiers of Flight Museum in Dallas, revealed much of the research he discovered while working on a book about the world's third largest airport in land area that stretches over four cities: Grapevine, Irving, Euless and Coppell.

His presentation is part of a three-part speaker series hosted by the Southlake Historical Society.  On April 16, the series will cover Southlake Town Square featuring former Mayor Rick Stacy and Frank Bliss, vice president of Cooper & Stebbins, and on May 10 Grapevine Lake will be the topic.

The first attempt to build an aiport halfway between the two cities was dubbed Midway Airport, but officially oppened as the Greater Fort Worth International Airport at Amon Carter Field.  Fort Worth annexed the land for the airpfield just south of Texas 183 (Airport Freeway).  Dallas wanted nothing to do with it.

Today, the only evidence of that airport is the alignment of Amon Carter Boulevard with the north end of the street using the original runway pavement.

Plans for a regional airport started coming together in the mid-1960s. The flat land north of Amon Carter field was chosen for D/FW Airport.  More than 17,000 acres were purchased, displacing farmers and ranchers.

"The purpose was to make enough of a buffer that there would never be a problem of noise complaints." Bleakley said.

The original layout of the terminals called for a single linear hallway stretching two miles. But the airport leadership wanted a revolutionary design. They turned to a Japanese-American named Gyo Obata, who came up with the half-circle design with parking losts in the center.

D/FW Airport opened in 1973 just as the airport to the south officially closed. It could handle jumbo jets and supersonic flight, a new phenomenon, Bleakley said.

A photograph taken when the airport was dedicated depicted a supersonic Concorde landing while a boy rode a horse in the foreground.

The airport has weathered many storms, Bleakley said, including the Delta Flight 191 crash in 1985 that killed 137 people. The terrorist attacks of Sept. 11, 2001, hit the airline industry hard and coincided with a $2 billion expansion D/FW Airport had just started.  Excavation had begun and the airport had a large hole in the ground, Magana said. The airport forged ahead with construction, and terminal D opened in 2005.